The Benjamin Bangs House is a single-family home located at 819 South Leroy Street in Fenton, Michigan.

Benjamin Bangs was the first village president of what was then Fentonville, elected in 1863. He built this fine house for his family in about 1866. In later years, the house served as a tea room, corset shop, and radio station at various times.

The Benjamin Bangs House is a two-story frame rectangular Greek Revival with a gable roof and one hip-roofed side wing. The front facade contains a door framed with pilasters and topped with a fanlight-like molding and a full entablature. The gable end terminates in a wide modillioned frieze below a boxed cornice with returns.

The Volney Church-Carlos B. Shotwell House is a single-family home located at 812 South Adelaide Street in Fenton, Michigan.

The original portion of this house was constructed in 1869 for Volney Church, about whom next to nothing is known. In 1903, the house was purchased by Carlos Shotwell, the Secretary of the Egyptian Portland Cement Company. Shotwell conducted an extensive renovation project, turning the formerly unimposing structure into an elegant mansion.

The Church-Shotwell House is a two-and-one-half-story structure built with a combination of Classical Revival and Queen Anne features. The house has irregular massing and a multi-gabled roofline, reflecting characteristically Queen Anne styling. Additional ornamentation on the building, including modillioned cornices and a gabled porte cochere with Ionic columns, reflects classical inspiration. Much of the home is brick, but some of the renovated portaions are constructed from cement produced by Shotwell’s company.

The David B. Colwell House is a single family home located at 901 South Leroy Street in Fenton, Michigan.

David B. Colwell and Edwin Adams owned and operated the Fenton Flour Mills. In 1870, Colwell built this house for his family. In 1880, he bought out his partner, and continued to operate the flour mill on his own.

The David B. Colwell House is a two-and-one-half story square brick Italianate house with a small, one-story addition constructed some time in the twentieth century. The front facade has a Classical gabled portico over an entry door with sidelights and an entablature. The windows on the first and second floor are four-over-four double hung sash units, placed symmetrically. Windows have stone lug sills and lintels. A brick beltcourse separates the second and attic stories. The attic story has small rectangular windows located in the frieze. The house has a low-pitched hip roof with
overhanging eaves, covered with light red tiles added at a later date.

The Col. J. Hinckley House is a single-family home located at 210 High Street in Fenton, Michigan.

This house was built in 1868 by Colonel J. Hinckley. Little else is known about Col. Hinckley, but the house was later occupied by a string of Fentonville’s most prominent businessmen. These included nineteenth century industrialist, A. J. Phillips, dry goods merchant Brent Birdsall, First National Bank of Fentonville founder David Latourette (who endowed the prestigious Fenton Seminary), and, in the 1920s, Aetna Cement Company president Earl Bunce.

The Col. J. Hinckley House has an Italianate massing, with two square sections with wide overhanging hip roofs, fitted together in an L-shaped configuration. However, the house lacks the typical Italianate ornamentation; indeed, other than a frieze with dentils located below the roofline, no particular detailing exist on the exterior. The lack of ornamentation highlights the home’s interesting exterior finish if stucco, applied by Bunce to the facades of his brick home.

The H.N. Jennings House is a single-family home located at 800 South East Street in Fenton, Michigan.

H. N. Jennings was the founder of The Fenton Independent, one of three popular newspapers published in Fentonville in the 1800s. Jennings was both editor and publisher of the paper. In 1868, he constructed this house on the south side of town, in an area popular with other Fentonville businessmen.

The H.N. Jennings House is a two-and-one-half-story frame residence. It is constructed in a Queen Anne style, but with symmetrical massing and balanced window placement that reflects a Classical influence. The front door is also clearly Classical in design, with elaborate sidelights, pilasters, a transom, and a full entablature. A Classical cornice runs across the top of the house. QUeen Anne influences can be seen in the stuccoed first floor, which gives the facade a variability. As well, the side panels and the windows have a massing and detailing that is more Victorian than Classical.

The Edwin Trump House is a single-family home located at 801 South East Street in Fenton, Michigan.

Edwin Trump was the President of the Trump & Wilmot Bank. He built this house in 1867, reportedly as part of a contest between Trump and his partner, George Wilmot, to see who could build the most lavish home. In 1872, Trump traded the house to local attorney A. U. Wood for a business block in downtown Fenton.

The Edwin Trump House is a two-story, wood-framed Gothic Revival structure built in a T-shape with multiple gables and dormers. It has a decorative open porch, containing Gothic ornamentation in its bargeboards, which match the bargeboards in the eaves of the gables.

The Vermont House (also known as the Fenton Hotel) and Fenton Grain Elevator are two adjacent buildings located at 302 and 234 North Leroy Street in Fenton, Michigan.

The original section of the Fenton Hotel is a rectangular, three-story brick structure on a rubble foundation with a float roof. It is located directly on the sidewalk line. The windows are simple rectangular units with stone lintels, placed symmetrically. A simple brick corniceline encircles the building. A two-story wood-framed, gable roofed addition, constructed in 1882, is attached on one side. A single story brick kitchen is attached at the rear.

The interior contains a foyer, bar and dining room on the first floor, with meeting and guest rooms on the upper floors. 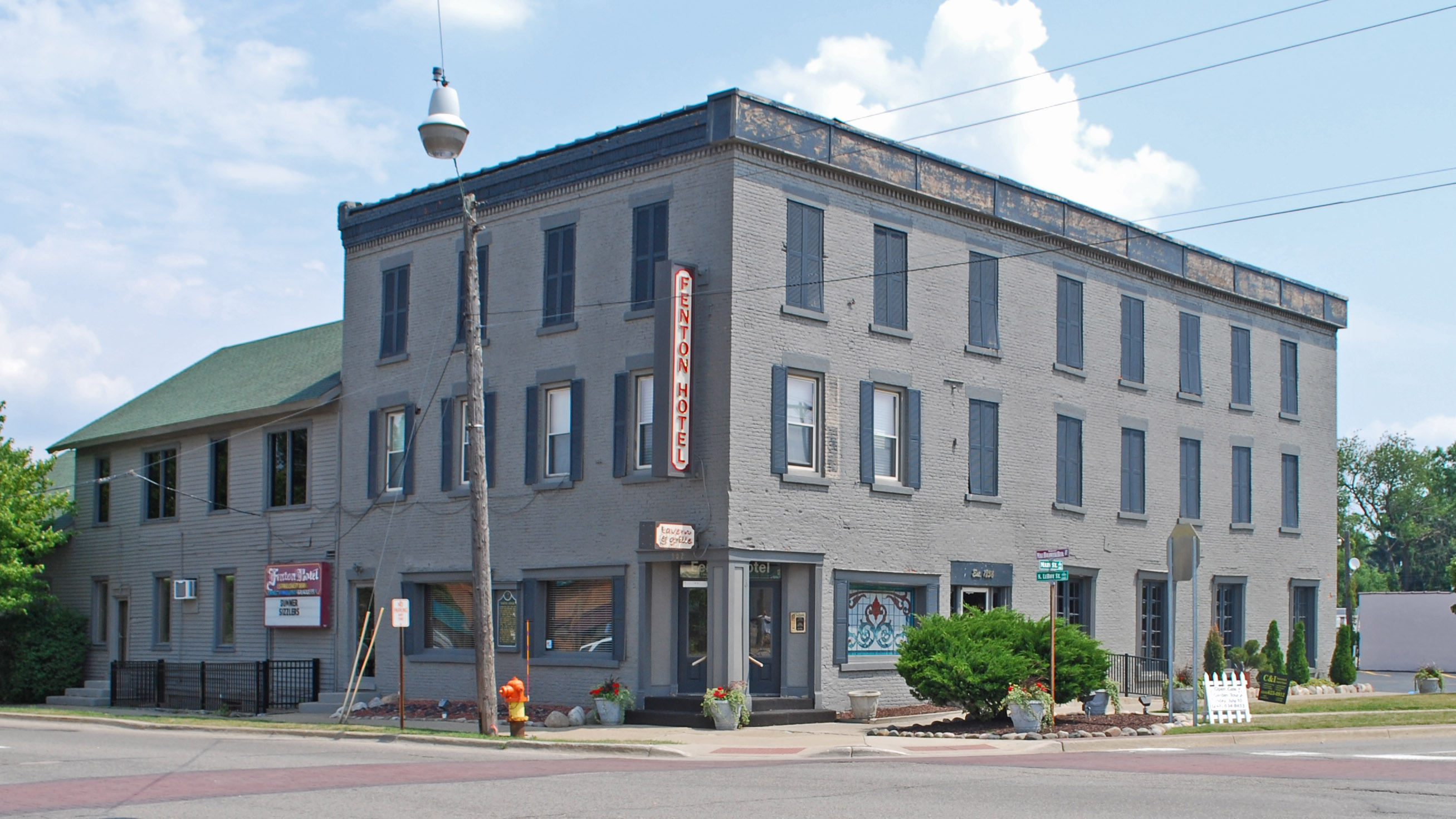 The Fenton grain elevator is located across the street from the Fenton Hotel. It is a wood frame structure covered with board-and-batten or clapboard siding, sitting on a rubble foundation. It is basically rectangular, with portions ranging from two to 3-1/2 stories in height. It has an irregular floorplan and asymmetric massing. The roof is a combination of gable and shed styles. The street facade has a business entrance with a door on the first floor and four windows on the second. On the side are three sets of huge double doors originally for cartloads of grain.

10 Historic Homes and Buildings in Michigan That You Should Visit

8 Amazing Kent County Sights and Landmarks That You Should See!